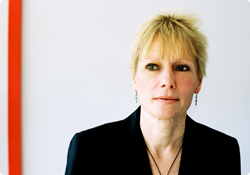 Ursula K. Heise is Chair of the Department of English at UCLA. She holds the Marcia H. Howard Term Chair in Literary Studies and serves as Interim Director of the Lab for Environmental Narrative Strategies (LENS) at the Institute of the Environment and Sustainability at UCLA. She is a 2011 Guggenheim Fellow and former President of ASLE (Association for the Study of Literature and the Environment). Her research and teaching focus on contemporary literature and the environmental humanities; environmental literature, arts, and cultures in the Americas, Western Europe, and Japan; literature and science; science fiction; and narrative theory. Her books include Chronoschisms: Time, Narrative, and Postmodernism (Cambridge University Press, 1997), Sense of Place and Sense of Planet: The Environmental Imagination of the Global (Oxford University Press, 2008), Nach der Natur: Das Artensterben und die moderne Kultur [After Nature: Species Extinction and Modern Culture] (Suhrkamp, 2010) and Imagining Extinction: The Cultural Meanings of Endangered Species (University of Chicago Press, 2016), which won the 2017 book prize of the British Society for Literature and Science. She is editor of the series Natures, Cultures, and the Environment with Palgrave, and co-editor of the series Literature and Contemporary Thought with Routledge. She is co-editor of the Routledge Companion to the Environmental Humanities (Routledge, 2017) and Managing Editor of Futures of Comparative Literature: The ACLA Report on the State of the Discipline (Routledge, 2017). She is also the producer and writer of Urban Ark Los Angeles, a documentary created as a collaboration of LENS with the public television station KCET-Link.